The result: It doesn't work.

Conclusion: Something is implemented wrong in the ffmpeg's part that reads inputs in such a way that it prevents ffmpeg from reading both named pipes as inputs at the same time (second shell).

by burek, 9 years ago 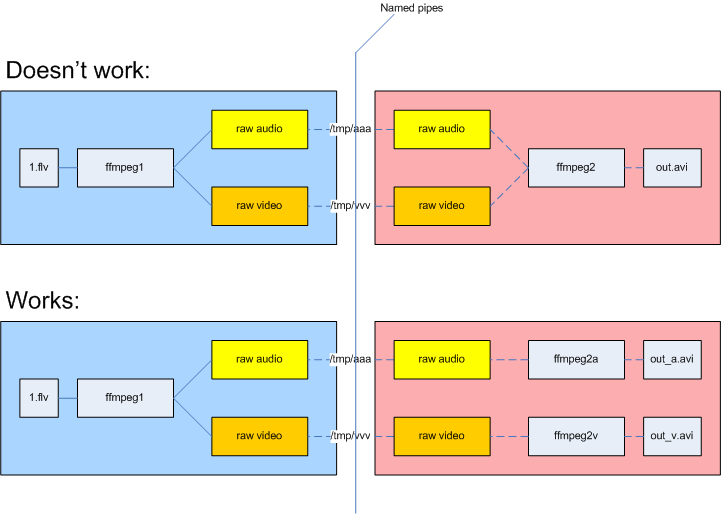 Btw, by "it doesn't work" I mean everything hangs, just like ffmpeg in second shell is waiting for something, and it doesn't read both inputs in parallel.

The first ffmpeg shows that it read the input properly and is just about to create outputs:

The second ffmpeg just hangs after the intro text:

Having two pipes between processes without very careful synchronization has never worked, for ffmpeg or anything else.

What is your real-world use for that kind of construct?

Well, to be honest, I don't see why should it hang and not work, i.e. I don't see why do those need to be synchronized. The first process outputs 2 different independent outputs, which another process collects and processes. No big deal there.

The real-world example is the splitting of the video and audio to batch script the concatenation of audio/video streams, like described in this faq item: ​http://ffmpeg.org/faq.html#Concatenating-using-raw-audio-and-video

The idea is to split all the audio/video streams, do the cat magic and join it again.

Since you are considering working with decoded raw video and audio, you should probably use the concat filter instead.

Well if I'm wrong (and I've used named pipes a lot in the past and never had such issues like this one mentioned in this ticket) then the faq item might be wrong as well. Since it does exactly what I described here.

Btw, such an example of a dead lock, that you offered, simply shouldn't happen in this scenario, since 2 outputs are completely independent (raw audio vs raw video) and if I'm not wrong, ffmpeg does that in separate threads, so that situation should never happen.

Also, 1 process is using both pipes for write only and 2nd process uses it as read only. So that's also the indicator that such deadlock should never occur in theory, for this scenario.

I don't think FFmpeg really uses to different threads.
But regardless of that, both FFmpeg instances will try to keep A-V sync and as soon as one makes a different decision on whether audio or video must come next to keep sync it will hang.
It can at best work when at least one has A-V sync handling disabled (which is basically what the second approach does).
It would still be very brittle, the only approach I can recommend is to just mux the two streams together if you want to process them together.

I'm trying to understand how does deadlock happen in this case, where 1 process is write-only and another is read-only. Where exactly does the deadlock occur?
Edit: I need to process them separately and then get back together into one container. See the link to the faq item I posted above.

I see, if I understand correctly, ffmpeg is doing 2 outputs in 1 thread and not in separate threads? Because of that it stucks when it can't write any of video/audio pipe, because the other process is not reading that one at the moment?

Can this be resolved by making ffmpeg do each output in a separate thread? If it's a command line option, do you happen to know which one is it?

If there is no command line option for that, would it be more natural to implement the creation of multiple outputs in multiple threads? That way, IMHO, it would work more natural than with a single thread. Also, it would solve this deadlock problem too, right?

This still seems to be an issue when using the latest code.

Is piping into ffmpeg from various sources a supported way of using ffmpeg in the general case? With rawvideo input?

If it should work, is there a reasonable path forward for fixing this bug? Is it likely to be a priority?

I think it should work. At least for raw stream inputs. Or is there any better way to convert raw video frames and raw audio from external application?

Consider reworking your command to use non-named pipes and introduce the 'pv' command into the pipeline to create a fixed-size buffer. Checkout this article which may be of assistance ​http://unix.stackexchange.com/questions/23488/non-blocking-buffered-named-pipe

Alternatively experiment with the fifo and afifo filters, but in my experience they consume large amounts of memory.